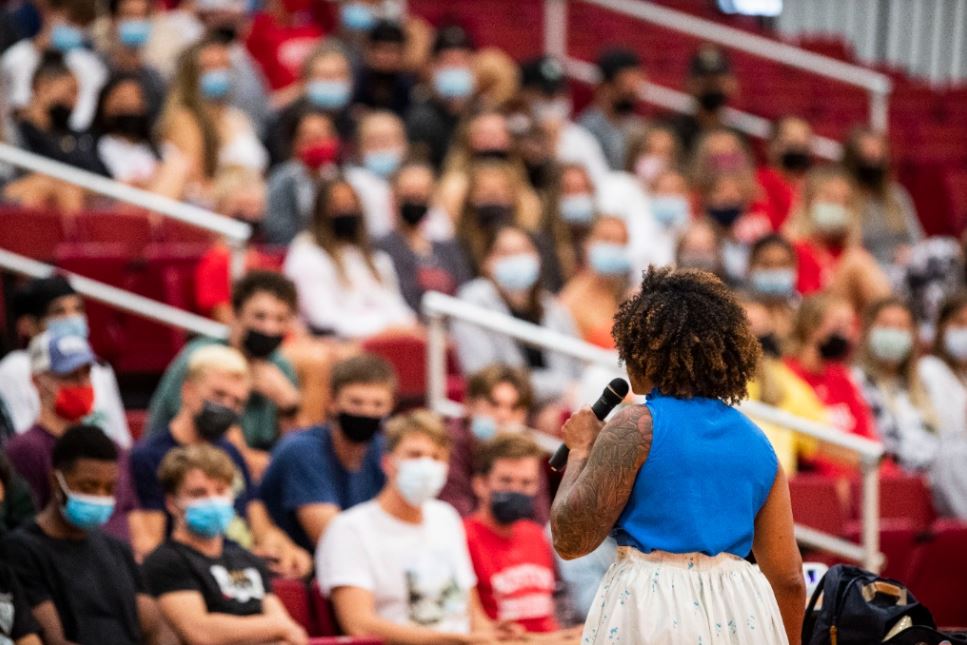 THE DECADE OF BEING SCARED BUT DOING IT ANYWAY. SAY SOMETHING, DO SOMETHING.

It’s time, friends. You may have spent the last few years or decades being a witness to problematic words, behavior, and people only to excuse it away. You sit in meetings or on committees and see your co-workers, those who we espouse to love and respect, get eaten alive when they voice concern over racist, homophobic, transphobic, xenophobic, or ableist language or views. You have sat idly as they looked your way for help, only to see the top of your head because you were afraid to make eye contact. Eye contact that would ask you not only why you weren’t standing next to them, but also why you weren’t standing up against something they know you knew was wrong. You see the continual vulnerable look on their faces as they glance around the room to get help from someone, anyone, and help does not come. Not only does help not come, but they also get complete silence. A type of silence that painfully fills the room and urges them to sit down and be quiet. A silence so strong that it takes from them their ability to be assertive and instead tells them that if they are quiet, they will potentially keep their job, they won’t be thought of as angry, or they won’t get the “here they go again” sigh. It is a silence that sits in the pit of their stomach when they realize that the support they thought they had doesn’t show up. All of those conversations about equity and inclusion evaporate into thin air. Instead, those they thought would be supportive go into a foxhole and cover themselves in hopes that the conflict passes over them. It is the silence that causes people from marginalized backgrounds to start carrying the heavy armor to protect themselves. The armor they have to put on to protect themselves not only from others… but from you.

Yep, I said it. From you. Why would they need to protect themselves from you, you ask? Because you didn’t show up in ways that demonstrated you not only had their back but were willing to stand in front of them. Instead of saying something, you waited until the smoke cleared and you see them holding their stomach, blood dripping, to say something. You waited until you had nothing to lose and no conflict on the front line, to say something. Maybe you offer a pat on the back with an “I completely agree with you” or an “I didn’t want to get in an argument, but you were entirely right.” Those comments you didn’t want to challenge because you have a mortgage to pay, kids to feed, or are conflict avoidant, still affect someone. They still affect the people from groups that have to consistently deal with figuring out ways to handle comments or situations like these, of which they have been the target too often.

Keep in mind that this isn’t happening only in offices. It is happening at parties, in conversations with friends, on athletic teams, in your one-on-one meetings with your supervisor, and at Thanksgiving dinner. It happens when you hear a fan yell something problematic, or a person on the bus next to you say something offensive. It is happening more than you might want to acknowledge because you think that those who said it or acted out those behaviors are nice people and didn’t really mean it that way. You might think to yourself: Those committee members must have known what they said was wrong, but if they didn’t say something, why do I need to say something? You like to believe that if they said something “REALLY” bad that you would step up and say something. You believe the intent wasn’t there, or they did not realize what they were saying. You believe that they are too old to change so why bother (as they sit on their iPad while texting on their iPhone), or you don’t want to start a conflict with someone you love. So, you don’t say a word, because it isn’t worth it in the long run.

People from marginalized backgrounds hear these excuses on a daily basis. Your fear of an uncomfortable situation stops you from helping someone who may truly need your help and support. Your fear of conflict and being disliked stops you from being the support system for a person you love and respect. Instead of stepping up, you murmur the things you think they want to hear that will absolve you from guilt and conflict and questionable looks. Maybe you try to crack a few jokes to “lighten” the mood or you tell yourself, “next time, I will say something.” But the courage you need for the “next time” doesn’t seem to arrive.

I continue to hear the stories people tell of a terribly problematic situation they witnessed and did nothing about. They talk about how they cried because they felt so bad… but did nothing. I am here to tell you that 2019 was your pass. It was your pass to do nothing. It is all that you will get because the problematic behavior and people will only get worse. The lack of diversity in meetings and groups will only get worse if you don’t support those who speak up or speak up yourself when situations call for it. Your disapproving eyes will not solve anything, neither will headshakes of disapproval. This will no longer be acceptable to just talk about. No longer will we have the time or energy to support your inaction. It will not get our sympathetic comments. It’s time to start saying something. It is time to start standing up and stepping up in times of conflict and discomfort. It’s time to start being okay with being the villain. We are so afraid of conflict that even though we know something is wrong, we are worried about how we will be perceived if we say something. How will we be perceived by our boss if we stand up to what they are saying? How will we be perceived if we say something to a family member who we love? How we be perceived by friends we grew up with that we are growing away from? It can be downright scary, sitting in a meeting and standing up to the person who pays you, knowing there might be financial consequences.

I understand all of that. But it is about to be a new decade and it is time to stand up for what you believe in and support those who are also willing to stand up. It is time to start finding ways to not only make room but to make a statement for people of marginalized identities. It will be scary at first. Your heart will beat faster than you thought possible. Your hands will sweat. But do it. Be the one to stand up and say something. It will be more appreciated than you will ever know. I can’t say that it will get easier, especially when dealing with people you know and love or work for and with. But it will get easier. You will get stronger. You will find the words to say that communicate exactly what your message is. As Brene Brown said in her book, “Braving the Wilderness”, There will be times when standing alone feels too hard, too scary, and we’ll doubt our ability to make our way through the uncertainty. Someone, somewhere, will say, “Don’t do it. You don’t have what it takes to survive the wilderness.” This is when you reach deep into your wild heart and remind yourself, “I am the wilderness.”