OUR VOICES ARE BEING HEARD, NOW MAKE THEM LOUDER 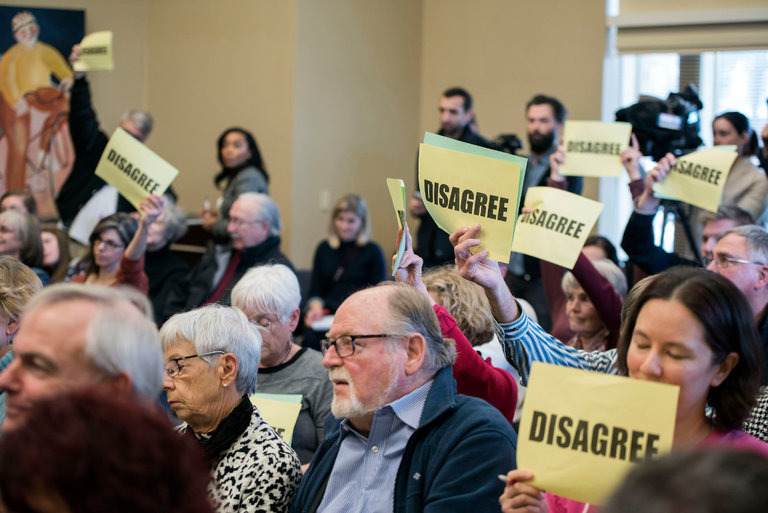 We seem to be living in a time where it has become absolutely apparent that although members of Congress are voted into office by the constituents of their district or state, they seem to not vote with those constituents in mind. The voice of those constituents has become loud and vocal, and Congressmen do not know how to handle it. They are not used to this, especially Republican Congressmen. They are used to polite town halls, low numbers  of constituents, and no detailed hot button questions. In 2009, after the election of Barack Obama, the tea party had their protesting time of taking over town halls. Behind the Rage at Healthcare Town Hall Meetings gives you insight into the protesting the Tea Party did  against healthcare. The Democratic Congressmen had to answer questions. Had to deal with angry constituents. This is not the first time constituents wants their voices heard.

The pendulum has swung towards the left, and we are taking over the townhalls- if the Republican Congressmen will have the townhalls, and we want answers. We not only want answers, we want specific answers on why they voted the way they did. They are expected to explain themselves. Republican town halls and  Angry town halls articles show how angry constituents are when their calls or emails about bills introduced, repealed or approved are being ignored by their Congressmen.

We want answers. We are not longer not sitting by the wayside allowing Congress to make decisions which affect us without any input anymore. There was a time when I had no knowledge of who my senators or representatives were. I did not know who they were, I did not vote in the midterm elections, and I certainly did not know how to get in touch with them. I did not understand the importance of it. But alas, times have changed and with this presidential election my eyes have been opened wide to how silent I was on change that has been occurring around me and that affected me. I think many are in my shoes, many that did not understand the importance of local and state elections.  We made sure to vote in the presidential elections, but paid no attention to the elections that affected us on a daily basis.

We did not hold our Congressmen accountable and did not get them used to hearing our voices on a regular basis. We now expect them to hear our voice and disregard party lines to vote on what is in the best interest of all the consitutents, not just those who voted for him.  Unfortunately, they want to operate within the notion of having silent constituents. Except we are no longer silent and unknowing. We see our voices making a difference, our protests being heard, and our expectations scaring them. We now recognize the power we have in our voice.

We need to keep on making our voices be heard. We need to force them into explaining their decisions, especially when it is one that will obviously hurt their constituents. We have done a great job of putting our Congressmen on the run, of having to consider their constituents when they make a decision because they know backlash will appear.

2. Pay attention to when they FINALLY have townhalls and attend them. Step up to the microphone and ask a question. Make them have to answer to those who voted for them.