Being a head coach is tough. You are the face of your program and if you are the head coach of a high profile team you might be the face of the athletic department. Fans can name you and not your athletic director or president of your institution. Your moves and decisions are watched like a hawk. Some because they want to emulate you and some because they want to see you fail. People always have their cameras ready to take a picutre of someone on top to help them fall to the bottom. They want to catch them saying or doing something wrong. It is because of these worries that having a diverse staff around you can help you see your blind spots when situations occur that can be taken out of context and when the intent cannot be seen clearly.

When situations that occur with your students of color or those marginalized backgrounds that get negative feedback there are questions to ask yourself such as: Are people making a big issue out of nothing or was there not enough critical thought and concern over the situation? Does the intent a person had overshadow the impact that landed? Am I concerned with the totality of the situation and all those affected? These are all concerns that should be thought about regarding factors that can and will affect your student-athletes, especially those with marginalized identities.

Most importantly, is the INTENT vs IMPACT considered? Those two things should always be considered when attempting to assist student-athletes that might not have the same life experiences you have due to privilege, identity, race, gender, class, ability or sexuality. The old saying, “The road to hell is paved with good intentions” is always relevant when one considers how terribly marginalized groups have been treated under the idea of “good intentions”. Good intentions cannot be used as a method to explain away the negative impact that ends up occurring. Many of the good intentions are done with little consideration to privilege, identity, race, gender, class, ability or sexuality. This is the #1 reason why it is so important to have a diverse staff around you that includes diversity of religion, backgrounds, class, thoughts, ideas, language, and personality. This diversity will allow you to consider viewpoints that you may never have known existed.  This diversity will allow you to understand what is acceptable and what isn’t. 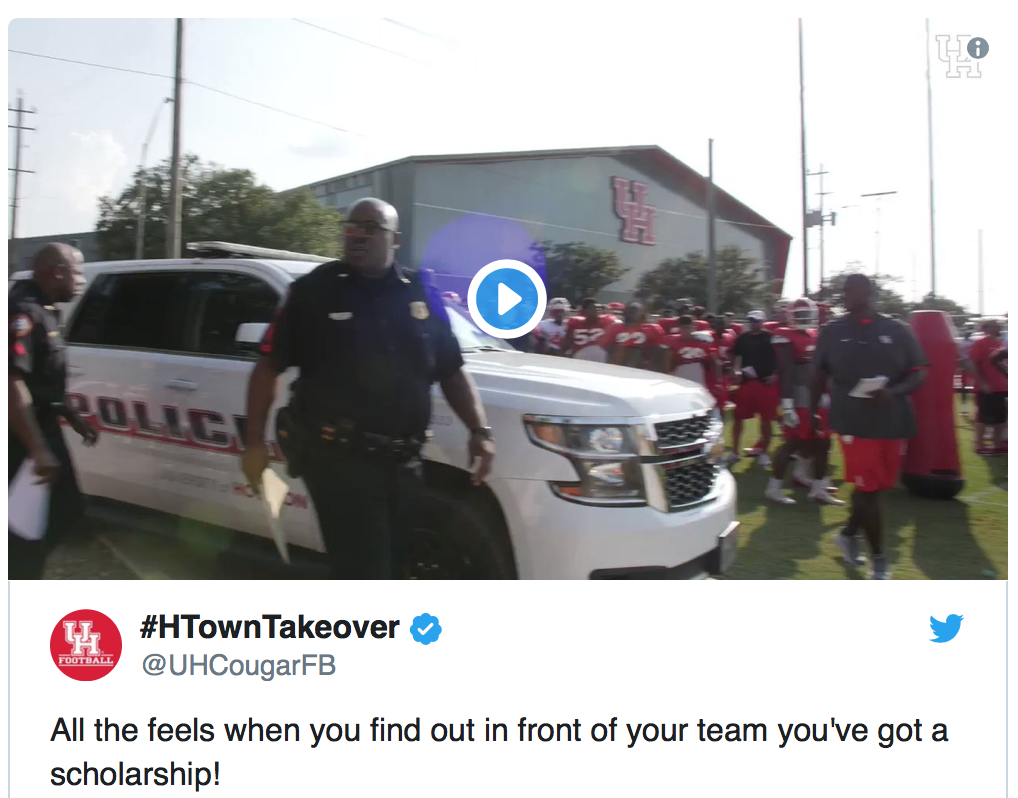 This is all said to give you, the reader, an understanding of why what occurred with Head Coach Major Applewhite and his black student-athletes was not acceptable. For those of you who aren’t familiar with the situation, the University of Houston Head Coach Major Applewhite decided to surprise five black Houston football players with scholarships by having, “A couple of University of Houston police officers show up at practice and very seriously tell head coach Major Applewhite they needed to speak with some players as part of an unspecified investigation. After the players nervously approached the cops, one officer told them they were on scholarship.”

There are 1,083,300 student-athletes who play high school football, and of that over a million football players, only 73,700 student-athletes or 6.8% make it to play NCAA Division I-III football. (NCAA)  Of that amount, not all of them are receiving an athletic scholarship, much less a full football scholarship. NCAA football teams can easily have over 100 student-athletes on their team. Due to the University of Houston being Division I, I am only going to focus on discussing their scholarship situation. Currently, there are two divisions within Division I football- the Football Bowl Subdivision (FBS) and Football Championship Subdivision (FCS). FBS teams get 85 football scholarships, and as they are a head count sport, have to give 85 scholarships to 85 student-athletes, there is no splitting them up. FCS is a different story. They have 63 scholarships which they can split up as much as they want to as long as all the money equals a total of 63 scholarships. They can have 200 athletes on scholarships as long as it equals 63 scholarships. Getting a scholarship is a time to celebrate. But we have to critically think about situations like this to make sure that the happiness you want to deliver isn’t going to be ignored because the delivery method chosen was not critically thought out. I say this because when I see situations like the Houston situation occur within collegiate athletics I question if they critically analyzed the situation or discussed the potential problematic areas with those of diverse thoughts and experiences. It also makes me wonder how much voice those who are on the staff have in situations like this and if they feel they can give a dissenting opinion to the head coach.

When looking at a situation like this, where the police are being asked to deliver scholarship papers to black student-athletes, one needs to think critically about the totality of the situation. What I mean by thinking critically is to do what Sensoy & DiAngelo (2017) explain as to “… think with complexity and go below the surface when considering an issue and explore its multiple dimensions and nuances.” p.23 If this is done then there should be a lot of questions  asked about the situation, the people involved, and how it can be potentially received.  Questions should be asked about the following:

-The social climate of the current times

-The relationship between the police and men of color

-How would this looks to the players themselves

-How it would look to their families

-Could this possibly give me, the head coach, the program, or athletic department bad press

-How will my players feel during or after this “surprise”?

The next step should be deeper questions that take into consideration bias, perjudice, and stereotyping such as:

– Am I as a coach unconsciously perpetuating stereotypes of black men?

– Am I thinking that because as a white coach I feel comfortable aroud police that my students of color have the same feeling?

-What am I unconsciously perpetuating?

– Am I attempting to learn more about my implicit bias so that future situations that have the best of intentions are not derailed?

– Lastly, who around me am I able to ask these questions to that will give me not only the answers I need but also the answers I might not want to hear.

Below is a great cheatsheet that was designed by Wabisabi to assist you in thinking critically about issues and situations. If interested in downloading it free please click here. 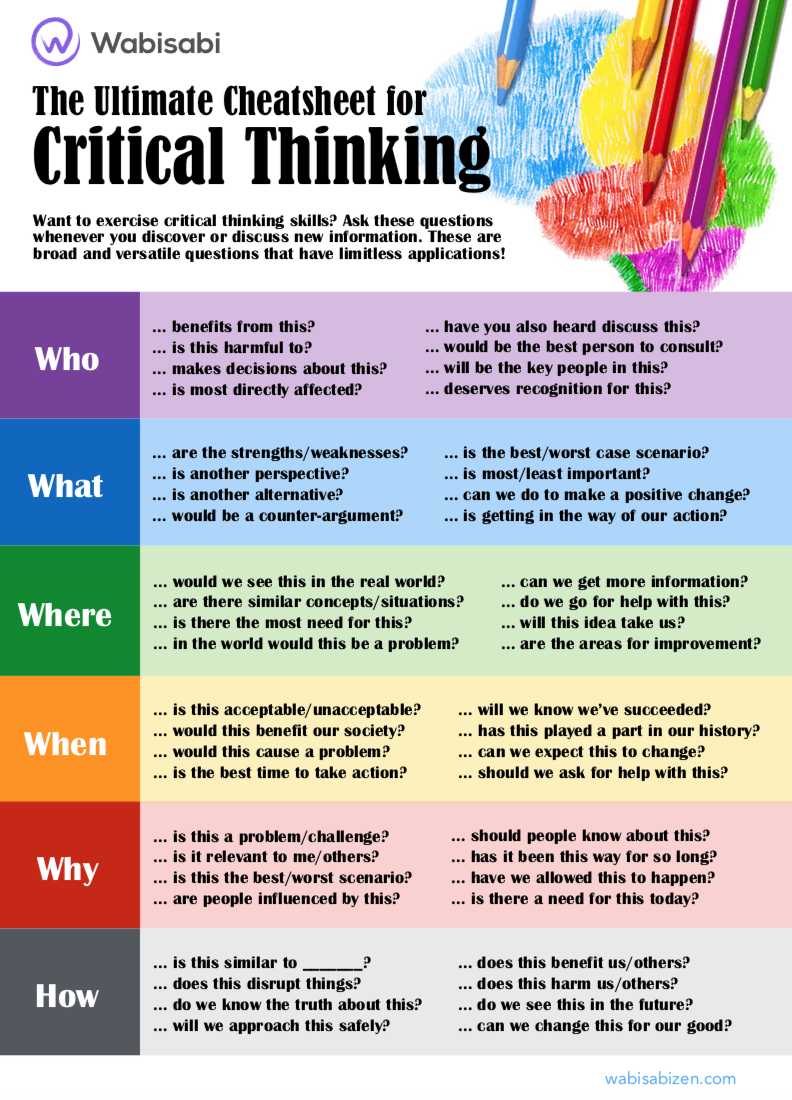 This is one of those times to have a diverse group of people around you to question the IMPACT of what you are doing, regardless of the INTENT. Too many people get those two confused and allow the intent to overrule a disastrous impact. It does not matter if you meant well if the impact scared the crap out of some black athletes. It doesn’t matter if they laughed about it, didn’t seem to care, or that you made sure the cops were black. Those things do not matter. As a coach, we always like to think that whatever we do is always in the best interest of our student-athletes. We like to think that when our impact doesn’t land the way we had assumed it would that the intent is enough. Right now special attention needs to be paid attention to the climate of society. Special attention needs to be made to the interactions people of color have had and are having with police of all races. Coaches who are coaching student-athletes need to be paying attention to how an interaction with police in a setting like that could’ve unnerving, especially when one realizes it was set up by the coach. This is a situation and the bad press that came with it could have been avoided by having consistent conversations about race, climate, lived experiences, and privilege within your offices. Are you having those conversations with your staff and student-athletes regularly? Do you feel comfortable talking to your staff about these situations and do the coaches feel comfortable in telling you when things aren’t a good idea.

The Houston situation should have been avoided and could have been avoided with some honest dialogue. If you do not have staff members of color that you can run situations like this by, then consider reaching out to the diversity/cultural centers on your campus. Those staff members are there not only for the students but also for other employees of the institution. Reaching out to them could help you not only make a mistake but also help educate you on future situations that can come up. Don’t be afraid to ask questions, be vulnerable in admitting what you don’t know, and asking for help. It could be the thing that saves you.