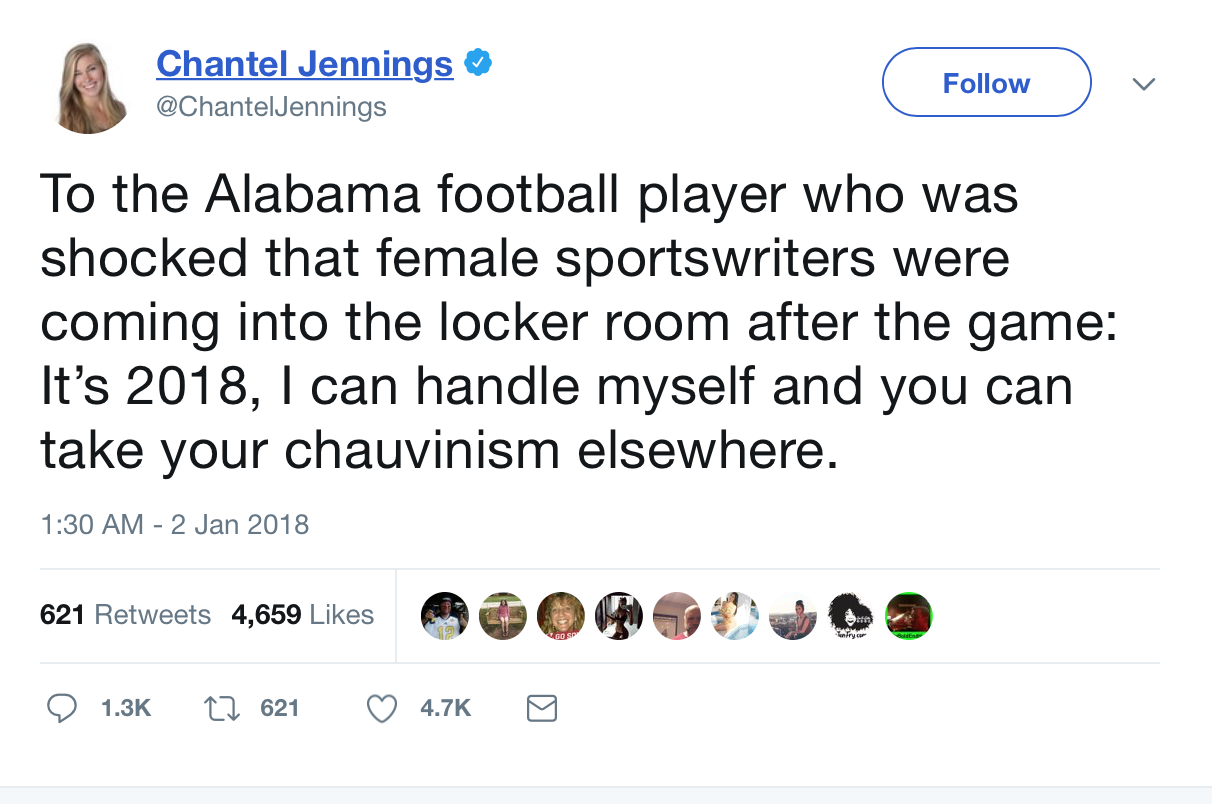 Privilege gets grace. No matter what. Society does what it can to keep privilege above everything. Male privilege will always be given grace over women. How you ask? Let’s take the example of the tweet of Chantel Jennings who is a national college football writer for The AthleticsCFB. As we all know, college athletics journalism is a male-dominated profession. This profession sees very few women and the women within it have to take many hits regarding their gender. There is an assumption they do not know what they are doing, they are there just for fun, or they need to consistently bow to the men within the profession. Let’s not even get into the sexual harassment women face within that industry on a consistent basis, but that is neither here nor there.  Anywho, Chantel went into the locker room of the Alabama football players after the game for interviews. While in there something occurred for Chantel to tweet, “To the Alabama football player who was shocked that female sportswriters were coming into the locker room after the game: It’s 2018, I can handle myself and you can take your chauvinism elsewhere.” Ahhhhhh shooot. Don’t you DARE call a football player a chauvinist! Don’t you dare.  These angels would never say or do anything remotely chauvinistic.

The responses to her tweet took adult men from being adults to being highly religious teenagers. It took her from being a professional to being a perverted woman who just wanted to see teenagers naked. The immediate assumption by fans was these football players were naked when she went in with evil thoughts. No grace was given to the thought that she was a professional and either waited until they had clothes on, announced she was going in or knew the best time to go in so it wasn’t an uncomfortable situation. But nope. No grace was given. It immediately was written that she was essentially a pervert. Bobby Wesson of the Facebook Page Alabama Nation decided to write her an open letter doing exactly what he was crucifying her for in the letter- openly shaming someone on social media. Within the letter male privilege came out in the open to make this her mistake not, the football player’s. How dare she write this about those innocent teenagers.

How did privilege get grace you asked? Privilege changed these football players who are over 18 to “half-naked teenagers” by Bobby Wesson. He now thinks these football players who have been playing at Alabama, which ranked 4th in the nation in 2016 in attendance at an average of 101, 821 fans, are now shocked reporters were in the locker room. Bobby stated “is the first time some of these players have been to a bowl game. The rules of the game are the same but everything else is different – the stadium, the atmosphere – and the access reporters have to players.” These athletes who get social media training and are taught how to handle reporters now have no clue what do it. That is grace being given. Grace in stating it was a mistake of a scared teenager not a chauvinist reaction by a male who grew up in a society dominated by misogyny, patriarchy, and male privilege.

Bobby, what the hell are you talking about? This is the first time the Alabama football players have had access to reporters? This is the first time they have played in a large stadium, with an intense atmosphere, that is on tv? That is grace ya’ll. Grace is making men who have played in front of crowds over 10,000 people into boys who have led a sheltered life and have never played on the big stage. Grace is changing all aspects of what these players have consistently dealt with as an Alabama Football player to make sure that a football player could not do something or say something chauvinist. Bobby even went as far to say “Maybe he was taught modesty. Maybe it was beaten into him. Maybe he was sexually abused. Maybe this kid put his big bad game face back on when the locker room where he felt safe was invaded by strangers he didn’t trust. Maybe you’re right. Maybe it was shock. Maybe it was chauvinism… or maybe it was fear. Maybe it was anger. Maybe it was both. Maybe it was all of the above. Maybe the southern baptist upbringing ingrained in him since birth took over and he was trying to protect you – or maybe something else took over and this teenage kid was protecting himself from you. Maybe not. Maybe a kid just made a mistake. Maybe the adult in the situation should act like one.”

So the assumption is the football players are now not adults? When did this happen? When did we drop these athletes to being young teenagers for the sake of protecting them and their male privilege by making sure it seemed they would never say or do anything chauvinistic? Give me a break!

Bobby Wesson and others have now moved to this football player being modest who was not only physically abused and sexually abused, but also afraid and angry that a female reporter went into the locker room. Grace. Grace is given to this unidentified football player who would never dare be a chauvinist because he is just a little “half-naked teenager.” Sharon on Facebook stated, “A woman that wants to be in a men’s locker room with naked men is a pervert, in my opinion. That’s not normal. Assume this kid is a Southern Baptist? That very well could be. Most churches in the south are Southern Baptist. Entirely possible. 18-year-old boys are still kids. Been around any and that is obvious. Girls mature 2 years earlier than boys. I was still a kid when I married at 19 and I was a girl. Women should not be invading the privacy of boys/men. Sexually abused? 1 in 7 boys have been sexually abused. That’s not out of the realm of possibility. It isn’t sexist to not want someone of the opposite sex invading your privacy. Perfectly reasonable expectation.” Sharon, do we even know if they were naked? How do we know they weren’t fully dressed? Why is there no grace given to Chantel’s ability to be professional and know the correct time to go into a locker room? This isn’t Chantel’s first rodeo and I guarantee that she has been warned of the proper method to enter locker rooms. As a former collegiate coach, reporters were allowed in the locker room, but it was after everyone was clothed. The website Midwest Sports Fans wrote a great blog on Putting to rest the myth that women’s teams don’t let male reporters into the locker room. This gives a great look into what female sports do with male reporters and it stops the “whataboutisms” that seem to be popping up.

This tweet exemplifies what people, both men and women, will do to keep male privilege and chauvinism front and center. Until we can admit there is privilege, and how much grace it is given to allow it keep flourishing, we will not be able to move down the road to stomp it out. We also need to look at the bigger picture as this isn’t just about male privilege but white privilege, cis gendered privilege, able-bodied privilege and so on. Folks, until we stop giving grace to protect privilege we will be stuck. It starts with baby steps, but we can do it.

Thank you for reading now go talk about race!! There is more of this so please check out my other blogs. If you have enjoyed it sign up for my newsletter. Follow me on all social media-jenfrytalks. Any questions, comments, or concerns? Email me at jenfrytalks@gmail.com.