Yesterday, March 31st, Morgan Williams truly made history within not only collegiate women’s basketball, collegiate women’s sports, or collegiate basketball in general. She made history within sports period. With seconds left on the clock, Morgan Williams of Mississippi State got the ball from a teammate, drove in, and shot a jumper to put Mississippi State up 66-64 over the Goliath and current National Champion UConn. She made the winning shot to beat a team who had an 111 game, three-year win streak. She did the unthinkable. Beat UConn. However, when Morgan was interviewed by Holly Rowe of ESPN she was interviewed WITH Dak Prescott current Dallas Cowboys quarterback. Wait, what? A woman made a historical shot to beat a team on an 111 game streak yet she wasn’t the only one being interviewed Dak Prescott was with her. Well actually, to be correct, she was with Dak Prescott. 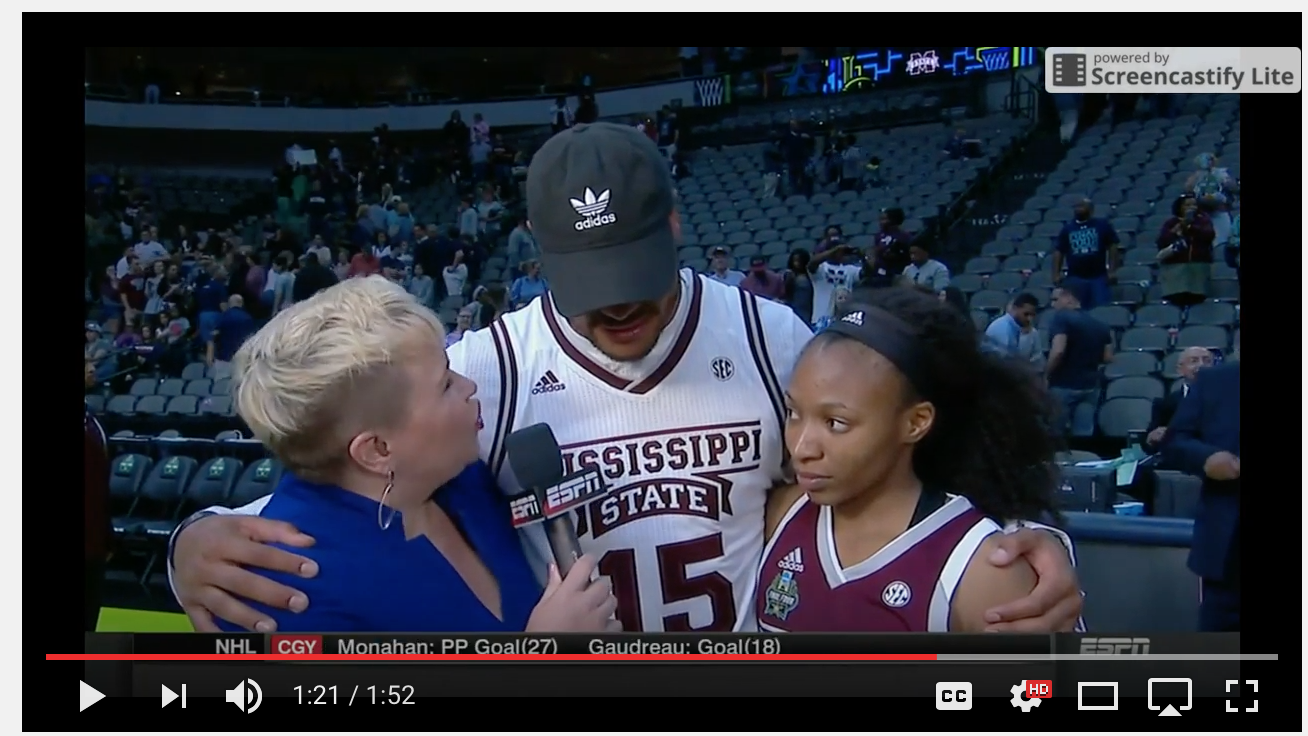 Both Morgan Williams and Dak Prescott were being interviewed, but Morgan wasn’t being asked questions about her performance. Dak Prescott was being asked about her performance, what he thought about it, how it made him feel. “How does it makes you feel knowing you have him, with all that he has accomplished, having your back motivate you” was the first question Holly asked Morgan, after asking Dak two questions. “Why does he believe in you so much” was her next question. So far Holly has asked four question, two to Dak and two to Morgan about Dak. Hopefully, Holly would have realized her mistake and started asking Morgan about how she felt, as she shot the game winner. Nope. Back to Dak with asking Dak, “How did his bulldogs get it done.” Ok, now, now maybe she will talk to the athlete who made the winning shot about how she felt… Maybe, hopefully… Nope. Back to Dak and asking him if he would be attending the national championship game.

When has a male collegiate team performed a historical event and a celebrity or famous female athlete was brought down in to be interviewed instead of the male who performed the feat? When have the views of a person watching the event been more important than the person actually involved in the event? NEVER. NEVER. EVER. Holly Rowe of ESPN showed exactly what society thinks of female sports. The views of the males watching the sports are more important than the women actually playing. We saw throughout the Olympics, male coaches given the kudos for their female athletes’ performance. We saw how much more of an emphasis the media put on Hungarian swimmer Katinka Hoozu’s husband who is also her coach than they did on Katinka Hoozu’s performances. The media’s words gave the assumption that the male coaches were the sole reason for the female swimmer’s successes.

However, in sexism, interviewing Dak Prescott AND Morgan Williams takes the cake. A woman makes a historical shot and she is of less importance than a male watching the game. Can we stop now? Can we stop pretending this doesn’t consistently happen? Can people actually start to acknowledge the downright sexism that occurs within women’s sports? I don’t know about you, but I am tired of it. I want to enjoy Morgan Williams’s interview and listen to her re-live probably what will be the best moment of her athletic and collegiate career. I do not want to hear a man, who only watched from the stands re-live it for her. Holly Rowe, you need to do better. You need to do better as a female interviewer interviewing another female, and you need to do better for that young lady because you just showed her and others like her that her performance doesn’t matter, what matters is the man’s view who watched it.

Shout out my Lyft driver for the awesome idea for the story.